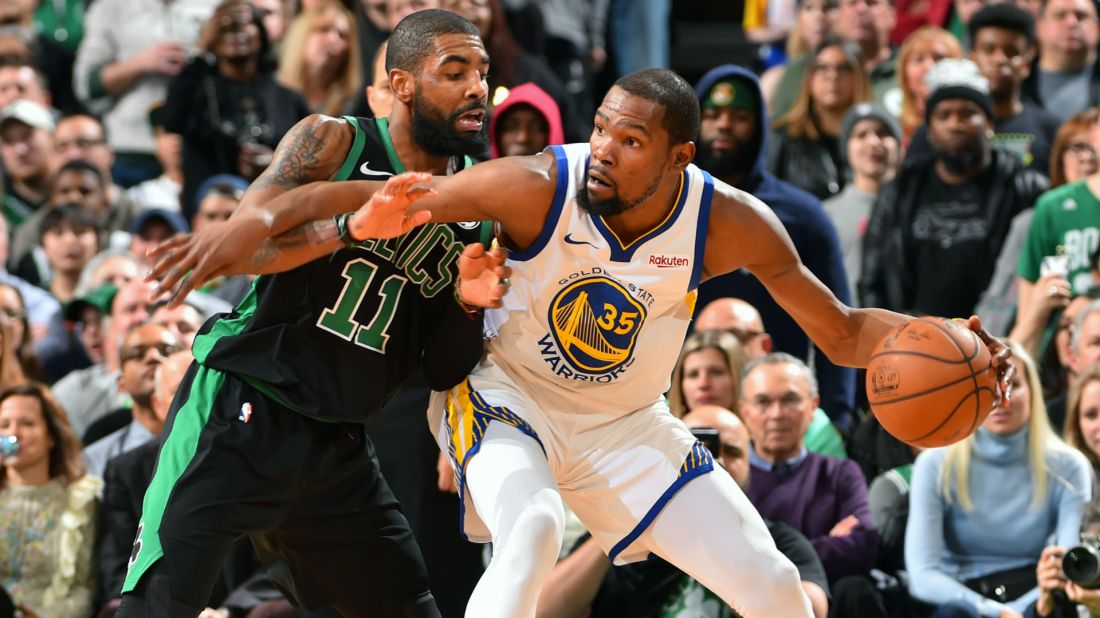 After a 5 game win streak the Celtics would have to take on their biggest test of the season yet as the Warriors came to town on Saturday. The Warriors entered the game as the top team in the western conference and recently they finaly added their big offseason addition in DeMarcus Cousins. The Warriors also are coming into the Garden on an impressive win streak of their own as they have won 9 in a row. But the Celtics have also been hot as of late including winning their last 5 in a row and their last 8 in a row at home. The Celtics will also get back their two hottest players as Kyrie Irving and Al Horford both return to the lineup after sitting out against the Cavs. It is a tall task for the Celtics as they look to try and limit one of the best starting fives ever assembled to try and extend their own win streak.

The two returning Celtics stars continued their hot streaks. Kyrie Irving led the way with 32 points on 12-27 shooting. Irving also added another double double to his season total as he also chipped in 10 assists and 6 rebounds. Kyrie was up to his usual big game performances as he was making circus shots like these.

Al Horford also continued his stretch of good play as well as he also had a double double. Horford had 22 points on 10-15 shooting with 13 rebounds. Horford showed off all aspects of his offensive game from raining it in from deep to throwing down major slams at the rim.

Marcus Morris had an average game as he finished with 9 points and 9 rebounds and fellow starter Marcus Smart chipped in 12 points. Jaylen Brown also added 10 points from off the bench.

But even with their great efforts in the fourth quarter a couple of costly turnovers led to the Celtics falling by a score of 115-111 to Golden State. The Warriors were led by Kevin Durant who had a game high 33 points with 9 rebounds. Steph Curry’s great second quarter helped him to finish with 24 points on 7-15 shooting including 6-12 from three point range. Klay Thompson also had a productive game with 21 points on 8-16 shooting. Boogie Cousins had probably his best game of his season so far with 15 points and 8 rebounds. Draymond Greens shooting still was ineffective but he stuffed the stat sheet in other ways with 11 rebounds and 8 assists.

With this loss the Celtics now fall to 30-19 on the season but this loss was actually very encoraging. Before the season the Celtics were pegged as one of the few teams that could actually challenge the Warriors in a seven game series in June and this reassured those thoughts. The Celtics only lost by 4 with their bench shooting only 26.3% from the floor and Marcus Morris in the midst of a mid season shooting slump. Plus if it weren’t for a couple of costly turnovers down the stretch late and a lucky bounce off the rim to Draymond Green the Celtics could have actually won the game. Also if Gordon Hayward can get his scoring more consitent by June the Celtics could actually defeat the Warriors in a seven game series, so long as they make it through the east.

The Celtics are now 5.5 games back of the east leading Raptors. Up next the Celtics will stay at home and try and avenge a loss from two weeks earlier as the surprisingly good Brooklyn Nets will pay the Garden a visit. It has already been announced Kyrie will be out with a left hip strain so look for Terry Rozier to get the start and play some productive minutes as the Celtics will look to bounce back after this tough loss.

Also All Star weekend is closing in on us so remember to keep voting. Kyrie is already locked in as a starter but lets try and get a couple more of his teammates down to Charlotte with him. So hit the link below and VOTE, VOTE, VOTE.