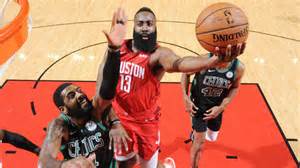 Coming off a thrilling Christmas day win over the Sixers the Celtics started their final road trip of 2018 starting with a team that has had a season much like the Celtics in the Houston Rockets. Both teams underperforming through the first quarter of the season but each picking up their play as of late. Coming into the game the Celtics injury bug seemed to have diminished greatly as only Aron Baynes was inactive with a broken left hand and Al Horford was on a minutes restriction of 25 minutes but was still in the starting line up for the game. The Celtics were looking for a similar performance like last years matchup at the Garden where James Harden still went for 34 points but was held to 7-27 from the field (Basketball-Reference.com). Another advantage for the Celtics coming in was that Chris Paul was out with a hamstring injury for the Rockets but the Rockets were also gaining some depth before the game as new signee Austin Rivers was declared active and was set to make his Rockets debut.

The Celtics were again led by Kyrie Irving on the offensive end who has been red hot as of late shooting the basketball. Irving had 23 points on an efficient 7-13 shooting from the floor with 11 assists including some amazing passes like this one to Marcus Smart.

Kyrie also had the handles going as he sent P.J. Tucker sliding across the floor before hitting an easy fadeaway jumper.

Marcus Morris also had a good game offensively with 19 points on 6-11 shooting and 6 rebounds, all that despite getting ejected in the fourth quarter with 4:38 left for his second technical foul of the night. Al Horford also had a productive game despite his minutes restriction finishing with 15 points on 7-12 shooting with 5 rebounds and 4 assists. Marcus Smart was also showing of the handles in his home state of Texas as he finished with 11 points and had this saucey fake pass for a lay-in.

That fake pass from Marcus Smart was smooth though (and it worked!) (@AAANe_MAnews) #AAANortheast pic.twitter.com/9G6xLeBL9k

The Celtics did also get some help off the bench from Jaylen Brown who had 18 points and 4 rebounds in 24 minutes. Jaylen also had another big slam, this time with the left hand over Clint Capela (Basketball-Refernece.com).

Despite the offensive output from the Celtics they never led at the end of a single quarter as their closest deficit was 2 point going into the half. The Rockets came out of the break and dominated the entire second half led by none other than James Harden. Harden was cooking early and did not look back as he went for 45 points on 11-26 shooting, 9-18 from three and 14-17 from the foul line. Everyone knew that Harden was gonna get his points but what killed the Celtics was the role players going off. Clint Capela had a big night with 24 points and 19 rebounds. Eric Gordon had 20 points on 7-16 shooting despite fouling out late in the fourth. But the two back-breaking performances came off the bench as Gerald Green had 10 points and in his Rockets debut Austin Rivers also had 10 points.

This game was similar to the Bucks and Suns losses last week when it came to rebounding as the Celtics got dominated on the glass. They were outrebounded in total 55-37 and 16-6 on the offensive end. This was another game where Baynes was missed as Capela had dominated over Daniel Theis for most of the night with Horford still on a minutes restriction. The Celtics also struggled mightily on the defensive end as 5 of the Celtics main rotation players had a plus-minus of worse than -10. Theis led the way in that department with a -27. Jayson Tatum was the one starter in the negatives with a -12 as he struggled on both ends scoring just 4 points on the night (Basketball-Reference.com).

Another story of the night was the technical foul happy refs who called a total of 6 on the night between the two teams. Clint Capela picked up a tech in the first half for hanging on the rim which was complete bull as he hung on the rim for maybe 1.5 seconds after the dunk. The Rockets bench then picked up a double technical in the third quarter as Chris Paul who was inactive got one for saying something to the ref. Coach Mike D’Antoni then picked up one as he tried to defend Paul. The Celtics picked up three of their own as Marcus Morris had one in the first half for a delay of game and then picked up his second in the fourth after being called for an offensive foul which led to his early exit. Marcus Smart then picked up one of his own with 24 seconds left in the game. It’s not like the technicals made a difference to the outcome as the Celtics would lose by a score of 127-113 but this tech-happy crew helped nobody tonight they were just unnecessary calls that just add to each player’s season total and gets them 1 tech closer to a suspension, 2 if your Morris.

The Celtics now sit at 20-14 on the season and 4.5 games out of first in the east. They have two more games on this road trip before the ring in the new year. The Celtics will have a game in Memphis on Saturday next where they will need to find a solution to the rebounding issue with the Grizzlies having all-star center Marc Gasol and rookie standout Jaren Jackson Jr down low. If Horford could get off his minutes restriction that could be a boost in itself for the team. Mostly in this game, I’d like to see Kyrie if he’s cooking like he was in Houston be more aggressive with his shot and be closer to 18+ shots rather than just 13. I’d also like to see Tatum have a bounce-back game from his poor performance in Houston. This game should be one where the Celtics can win as on paper they just have more talent than the Grizzlies but they will need to regain their focus if they want to win this one. Hopefully the Celtics can grab this win and one in San Antonio on Monday and finish 2018 on a good note.